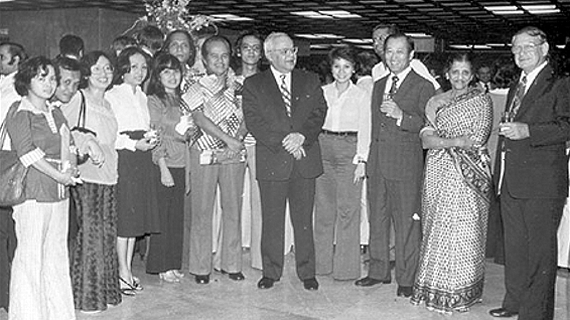 The Asian Development Bank was conceived in the early 1960s as a financial institution that would be Asian in character and foster economic growth and cooperation in one of the poorest regions in the world.

A resolution passed at the first Ministerial Conference on Asian Economic Cooperation held by the United Nations Economic Commission for Asia and the Far East in 1963 set that vision on the way to becoming reality.

The Philippines capital of Manila was chosen to host the new institution, which opened on 19 December 1966, with 31 members that came together to serve a predominantly agricultural region. Takeshi Watanabe was ADB's first President.

During the 1960s, ADB focused much of its assistance on food production and rural development. When the world suffered its first oil price shock, ADB increased its support for energy projects, especially those promoting the development of domestic energy sources in member countries.

Cofinancing operations, in which ADB manages the funds of other organizations, began to provide additional resources for ADB projects and programs. ADB’s first bond issue in Asia—worth $16.7 million and issued in Japan—took place in 1970.

A major landmark was the establishment in 1974 of the Asian Development Fund to provide low-interest loans to ADB's poorest members.

By the end of the decade, some Asian economies had improved considerably and no longer needed ADB's assistance. In 1982, ADB opened its first field office—in Bangladesh—to bring operations closer to the people in need. Later in the decade, ADB began working with nongovernment organizations to help disadvantaged groups. In 1995, ADB became the first multilateral organization to have a Board-approved governance policy to ensure that development assistance fully benefits the poor. Policies on involuntary resettlement and indigenous peoples were also put in place.

ADB's membership continued to expand with the addition of several Central Asian countries following the end of the Cold War.

In 1999—recognizing that economic development was bypassing many people in the region—ADB adopted poverty reduction as its overarching goal. With the new century, ADB focused on helping its member countries achieve the Millennium Development Goals.

ADB also had to respond to unprecedented natural disasters, committing more than $850 million for recovery in areas of India, Indonesia, Maldives, and Sri Lanka hit by the December 2004 Asian tsunami. In addition, a $1 billion line of assistance to help victims of the October 2005 earthquake in Pakistan was set up.

In 2009, ADB's Board of Governors agreed to triple ADB's capital base from $55 billion to $165 billion, giving it more resources to respond to the global economic crisis. 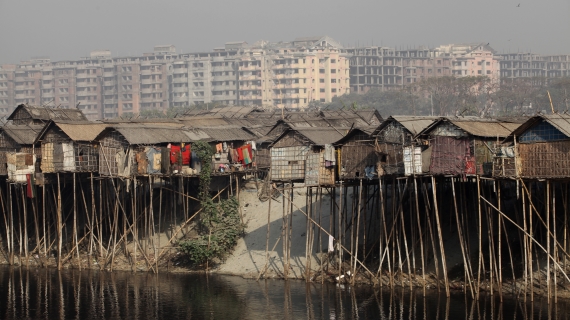 Asia moved beyond the economic crisis to emerge as a new engine of global growth in 2010 when the region’s gross domestic product increased by 9%. This was more than double the global growth rate during the same period and well above the 5.9% rate recorded in the region in 2009.

While the speed and strength of its economic recovery surprised many, the region still faced daunting challenges and remained home to two thirds of the world’s poor and a growing problem of inequality. This increasing gap between the rich and poor focused ADB on the need to promote inclusive growth in the region.

In response to reforms initiated by the Government of Myanmar, ADB resumed operations in the country. In April 2014, ADB established offices in Nay Pyi Taw and Yangon.

In May 2014, plans were announced to combine the lending operations of ADB’s two main funds, the Asian Development Fund and its ordinary capital resources. The merger will boost ADB’s total annual lending and grant approvals to as high as $20 billion—50% more than the current level when it takes effect in January 2017.

As the era of the Millennium Development Goals (MDGs) draws to a close, the results have been mixed. While ADB’s work has contributed to Asia and the Pacific slashing extreme poverty by more than half, the region is still home to 1.2 billion people who live on $3.10 a day or less and almost three-quarters of the world’s underweight children. About 600 million people have no access to electricity and 1.7 billion still lack improved sanitation. A huge amount of work still must be done with the new Sustainable Development Goals as important guideposts.