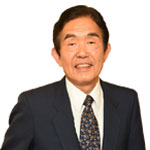 He has written extensively on population and development in Japan and other Asian countries. His research has focused on issues such as the socioeconomic impacts of low fertility and rapid aging, modeling demographics and social security-related variables, and policies related to fertility, employment, marriage, childcare, retirement, and care for the elderly.

His recent work includes analyzing intergenerational transfers based on National Transfer Accounts and remeasuring population aging by shedding light upon changing cognitive functioning among old workers in Japan and other Asian countries.