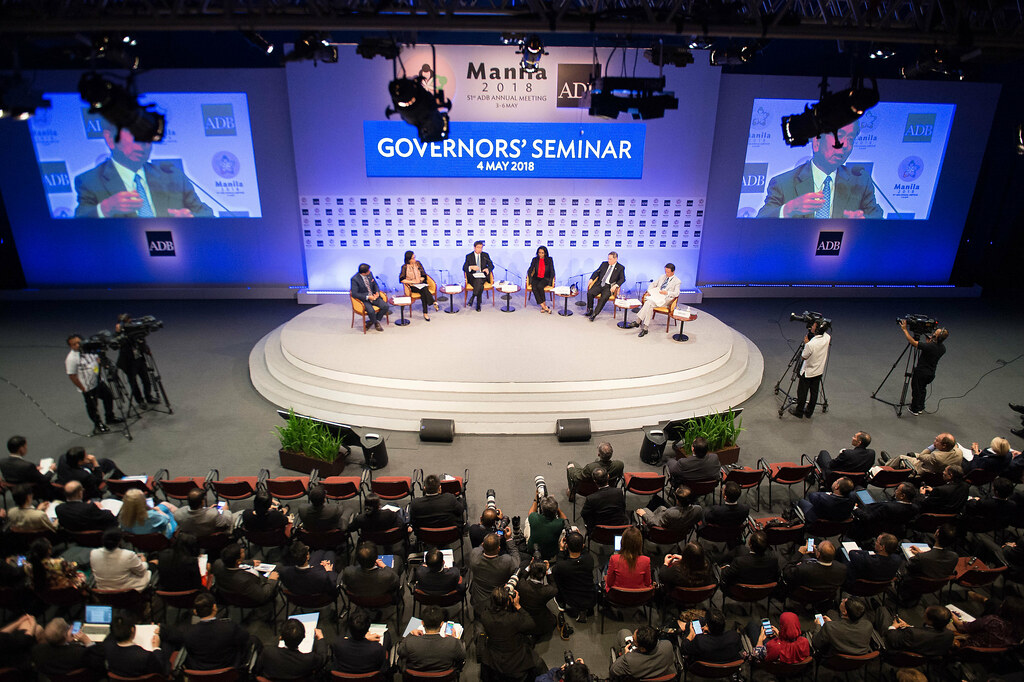 New technologies have been a key driver of economic growth and the creation of more productive and better paying jobs. However, there is growing concern that recent advances in fields such as robotics and artificial intelligence could lead to widespread job losses. How real are such concerns? What is the experience of different countries? What can governments do to ensure that new technologies benefit all workers, not just the highly skilled?

These questions were discussed at the Governors’ Seminar, Technological Change, Globalization, and Jobs in Asia, at ADB’s 51th Annual Meeting, by President Takehiko Nakao and other panelists including< Mr. Carlos G. Dominguez, secretary of finance of the Philippines; Ms. Sri Mulyani Indrawati, minister of finance of Indonesia; Mr. Taro Aso, deputy prime minister and minister of finance of Japan; and Mr. Aiyaz Sayed-Khaiyum, attorney-general and minister for economy, public enterprises, civil service, and communications of Fiji.

Mr. Nakao noted a number of compelling reasons why the net effect of new technologies on jobs would be positive, a point that the other panelists concurred with. It was also agreed that there would be disruptions from new technologies for some workers, especially those engaged in manual and routine tasks, and that governments should respond to ensure that the benefits of new technologies reach all.

Mr. Carlos G. Dominguez noted that there were some downside effects from new technologies, such as the risk of growing inequality. But, such risk could be mitigated through appropriate policies in areas such as education, training, and social protection. Ms. Sri Mulyani Indrawati emphasized that innovative companies were seizing on digital technologies to reduce information and transactions costs for farmers, informal sector workers, and SMEs; they were also promoting financial inclusion. Mr. Aiyaz Sayed-Khaiyum also noted the various ways in which new technologies support inclusive development, including enabling fishermen to get better prices for their fish, helping the government improve tax administration, and responding to climate related challenges. Mr. Taro Aso stressed that investments in quality infrastructure were indispensable for providing the economic backbone that will enable the region’s firms and workers to utilize and benefit from new technologies.

In his closing remarks, Mr. Nakao emphasized the importance of using new technologies in ADB’s own work and making ADB a forum for sharing knowledge on how to make new technologies benefit society at large.

Taro AsoGovernor for Japan, ADB; and Deputy Prime Minister, Minister of Finance, and Minister of State for Financial Services in Japan

Mr. Aso had previously served as Prime Minister, minister of foreign affairs, minister for internal affairs and communications, and minister of state, economic and fiscal policy of Japan.

Carlos G. DominguezChair of the Board of Governors and Governor for the Republic of the Philippines, ADB; and Secretary of Finance, Philippines

Ms. Indrawati previously served in the same post of minister of finance of Indonesia from 2005 to 2010, before she was appointed as managing director of the World Bank Group in June 2010.

Aiyaz Sayed-Khaiyum is the Fijian attorney-general and minister for economy, public enterprises, civil service and communications. He is also the minister responsible for climate change. Since joining the Fijian Government in 2007, Mr. Sayed-Khaiyum has initiated a comprehensive program to modernize Fiji’s laws. He also oversaw the development of a new Fijian Constitution that provides the legal foundation for a common and equal citizenry while protecting indigenous land ownership and rights. As the minister for civil service, he has overseen the reform of the civil service, modernizing it to deliver better service and for government to be an employer of choice. As the minister for economy, he reformed the Fijian taxation system and has also been a leading proponent of forging public-private partnerships.

Zeinab BadawiInternational Broadcaster and Chair of the Royal African Society

Ms. Badawi is an award-winning broadcaster with extensive experience, including in programs like the BBC's Hardtalk and Global Questions. She has also produced the History of Africa series. Ms. Badawi sits on several public bodies and is chair of the Royal African Society. She has a BA Hons in politics and economics from Oxford University, a history MA from SOAS University (awarded with distinction), and two honorary doctorates.