Past, Present, and Future of the World Economy | Asian Development Bank

Past, Present, and Future of the World Economy 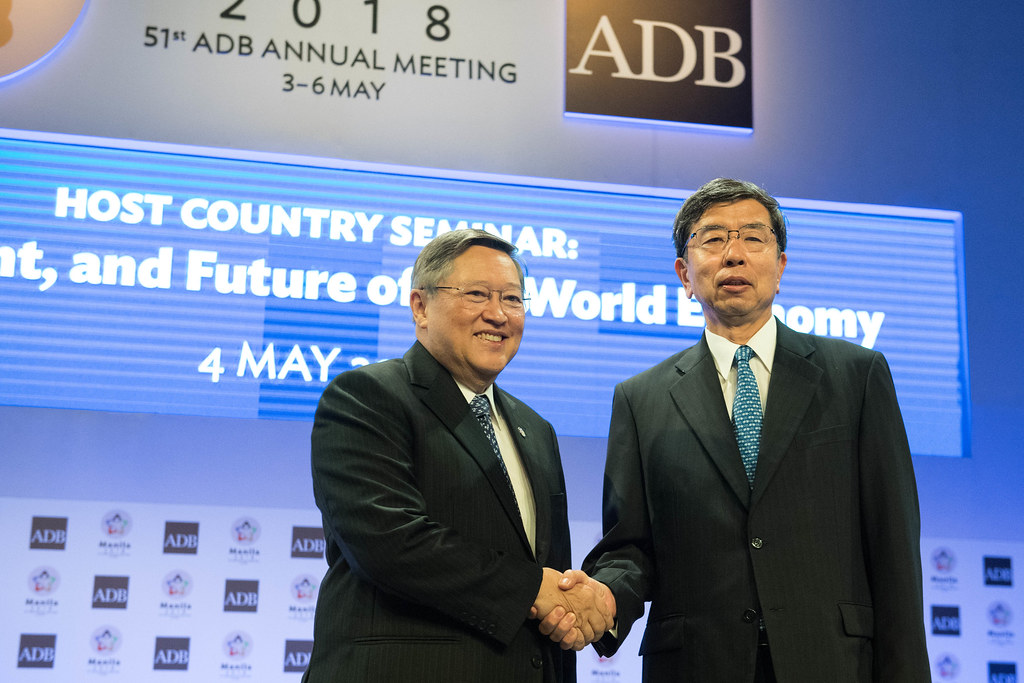 Bringing together distinguished speakers from the fields of history, economics, and digital finance, the Manila 2018 host country event delved into the past using an unconventional lens to frame one of the biggest global economic shifts in history, reexamine governance structures in the current global economic order, and explore how governments and development institutions can adapt by harnessing new opportunities while addressing challenges presented by an increasingly digital future.

In his opening remarks, 2018 ADB Board of Governors Chair Carlos Dominguez emphasized how disruptors brought about advancement throughout history, and expressed hope that the seminar would generate “ideas that will help us deal not only with the promise but also the peril of rapid technology-driven transformation”.

The first part of the forum, titled “The Silk Roads and Beyond,” explored the dynamics that shaped the ancient world order and how it relates to what may be considered as the reemergence of Asia in today’s global stage. Peter Frankopan, global history professor at Oxford University, delivered a presentation on understanding the past as the way to understanding the future. The growth of the Asian economy has been pronounced over the last three decades, evidenced by its rising share of global GDP and the 10–15 fastest-growing economies all coming from the Eastern hemisphere for the past years. This is the reemergence of the silk road economies.

The panel discussion that followed explored how past experiences are teaching us how to tackle present and future challenges. Emphasis was given to infrastructure and connectivity, as significant now as the silk roads were for over 2,000 years in the trade and exchange of goods and ideas. The activities surrounding the silk roads, however, had been largely extractive and without much regard to combating poverty. On the other hand, the changes brought about by technological advancement and the focus of economies on massive infrastructure buildup, among others, are some of the evolving drivers of poverty alleviation. Development institutions are necessary forces in supporting economies to achieve the goals of poverty reduction and inclusion.

The second session, “Saving the International Economic Order,” was led by Paola Subacchi, a senior research fellow at Chatham House focused on global economy and finance. Ms. Subacchi described the current state of economic governance, with the United States dollar being at its core. While the dollar continues to dominate the international monetary system, the US will continue to be a global key player, she said. However, Ms. Subacchi viewed the US as becoming a reluctant leader, seemingly unwilling to continue providing for public goods and financing. She posed alternatives given the current movements: the United States will either open opportunities for other countries to take its role and move in a more decisive or balanced governance, or there will be a standstill where no one will move.

The panel discussed the international economic order being a prosperity shared by nations through trade for all people. However, threats to this order come in different ways, such as the domination of US currency. The panel suggested ways to move away from the dollar, such as by looking at a multicurrency system and avoiding a currency war among lesser national currencies.

The third part of the forum, “Financial Technology for Inclusion,” was delivered by Mr. Eric Jing, CEO of ANT Financial Services Group. Mr. Jing proposed that inclusion is the largest dividend of digital technology, since it is able to provide greater coverage compared to technologies of the past century. Digital technology will help shape the financial systems making it more inclusive, secure, transparent, and trustworthy, further promoting sustainable growth around the world. Financial inclusion through digital technology lies atop four pillars: (i) digital infrastructure; (ii) an enabling regulatory environment, which is critical to ensure policies are created to encourage innovation as well as manage and mitigate risks; (iii) financial technology; and (iv) consumer protection, the starting point of the need to innovate to bring more benefits for consumers and to safeguard their issues.

The third panel discussion talked about the opportunities brought about by digital technology, as well as its challenges. The focus on consumers was also reiterated. It ended with the idea that digital technology, as the silk road of the future, enables people, countries, and economies to be more connected than ever, providing an opportunity for more collaboration in ensuring sustainable and inclusive development for everyone.

In his closing speech, Bangko Sentral ng Pilipinas Governor Nestor Espenilla concluded that the Philippines will be able to cope and compete with the emerging markets despite the shifts in international economic order brought by (i) the growing influence of the People's Republic of China's, (ii) greater representation of multilateral institutions, and (iii) disruptions to economic landscape caused by innovation and technological advances. The Philippines, as an example, is able to effectively manage the risks that come with innovation by continuously monitoring financial technology developments, and practicing proportionate regulation, multi-stakeholder collaboration, and consumer protection. He added that with the existing advancements, a sustained economic growth over the long term may be achieved if it is done in an inclusive manner.

Carlos G. Dominguez Chair of the Board of Governors and Governor for the Republic of the Philippines, ADB; and Secretary of Finance, Philippines

Part 1: The Silk Roads and Beyond

Peter Frankopan is professor of global history at Oxford University, where he is founding director of the Oxford Centre for Byzantine Research and senior research fellow at Worcester College. He studied history at Cambridge University before doing his doctorate at Oxford. He has been Stanley J. Seeger visiting fellow at Princeton, Presidential scholar at the Getty Center, and Scaliger visiting professor at Leiden University. Mr. Frankopan works with the United Nations Industrial Development Organization (UNIDO) on the future of sustainable cities and on the Belt and Road Initiative. In 2017, he was appointed senior advisor and academic expert to a major project for the World Bank and Department for International Development (DFID) on transport corridors in South Asia. Mr. Frankopan’s most recent book, The Silk Roads: A New History of the World, has been described as "magnificent" (Sunday Times), "dazzling" (Guardian), "a rare book that makes you question your assumptions about the world" (Wall St Journal), "a treasure" (Libre Belgique), "phenomenal" (Die Welt), "a joy" (Le Point), and "not just the most important history book in years, but the most important in decades" (Berliner Zeitung). A New York Times bestseller, it has topped the nonfiction charts all around the world, including in the UK, India, and China.

Naoyuki Yoshino is Dean of the Asian Development Bank Institute, Chief Advisor at the Japan Financial Services Agency’s Financial Research Center, Chairperson of the Meeting of Japanese Government Bond Investors, and Professor Emeritus of Keio University, Japan. He obtained his PhD from Johns Hopkins University in 1979. Mr. Yoshino has served as Chair of the Financial Planning Standards Board. He has also been Chair of the Japanese Ministry of Finance’s Council on Foreign Exchange as well as Fiscal System Council. He has been a Board Member of the Deposit Insurance Corporation of Japan, and President of Japan’s Financial System Council. He has honorary doctorates from the University of Gothenburg (Sweden) and Martin Luther University of Halle-Wittenberg (Germany).

Paola Subacchi is the former director of international economics research at Chatham House, and a visiting professor at the University of Bologna. She is an expert on the functioning and governance of the international financial and monetary systems, and advises governments, international organizations, non-profits, and corporations. She is a media commentator with the BBC, Project Syndicate, the Financial Times, and writes a regular column for Foreign Policy and Huffington Post Italy.

Ms. Indrawati previously served in the same post of minister of finance of Indonesia from 2005 to 2010, before she was appointed as managing director of the World Bank Group in June 2010.

Eric Jing is the CEO of Ant Financial Services Group, a technology company that operates the world's largest mobile and online payments platform, Alipay, and Yu’e Bao, the world's largest money market fund. Mr. Jing was appointed president of Ant Financial in 2015 and has been serving as board member of Alibaba Group since August 2016. After joining Alipay as a chief financial officer in 2009, Mr. Jing became Ant Financial’s operating officer in October 2014.

Mr. Nestor A. Espenilla, Jr. is the governor of the Bangko Sentral ng Pilipinas (BSP). He took office as the fourth governor of the BSP on 3 July 2017. As BSP governor, he serves as chair of the Monetary Board, the BSP’s principal policy-setting body. He is concurrently chair of the Anti-Money Laundering Council and the Financial Stability Coordination Council. Mr. Espenilla holds a bachelor of science degree in business economics (magna cum laude) and an MBA from the University of the Philippines, and a master of science degree in policy science from the Graduate Institute of Policy Science in Tokyo, Japan.