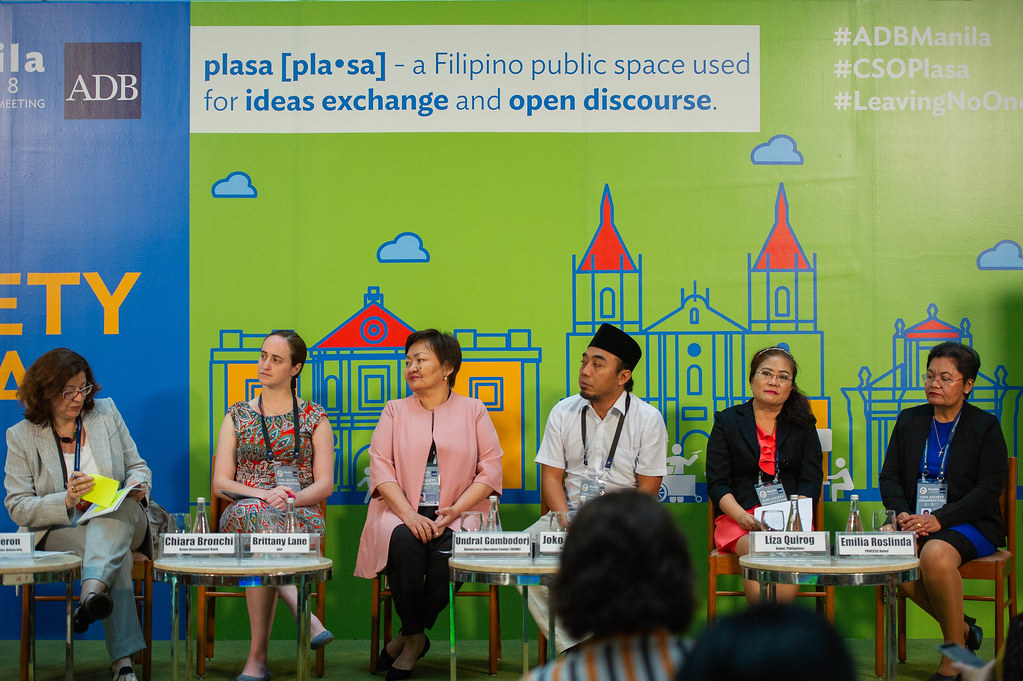 Bringing the Open Government Partnership to the Local Level

How the innovative use of technology is being used to enhance citizen participation in government decision-making and oversight was one of the key themes discussed at this civil society seminar examining the localization of the Open Government Partnership (OGP).

The OGP is multilateral initiative that aims to promote transparency and strengthen governance through citizen engagement and concrete commitments from governments. The seminar heard that, since 2011, 96 governments are working with over 2000 civil society organizations (CSOs) on over 2800 commitments. In 2016, under the OGP Local pilot, the OGP was opened to subnational participants and has supported 20 participants (subnational governments) from around the globe.

Over 80 civil society participants at the seminar, organized by Caucus of Development NGO Networks, CODE-NGO as part of the civil society program under the ADB’s 51st Annual Meeting in Manila, heard examples of how the OGP is being localized by municipal and provincial governments in Georgia, Indonesia, Korea, Mongolia and the Philippines. Measures and technology supporting the OGP at a local level included participatory budgeting, electronic petitions (including the ‘your ideas for city mayor’ portal in Tbilisi), consultation on city laws and acts, freedom of information access, digital office for citizens and the mayor and ‘check my service’ mobile applications, which provides citizens in Ulaanbaatar, Mongolia with the ability evaluate local services from hospitals to schools to traffic lights.

ADB’s Deputy Director General and concurrently Chief Thematic Officer, Chiara Bronchi, noting that the ADB joined OGP in 2014, said that the value of OGP was potential it has to accelerate trust between citizens and governments.

Prior to joining ADB, she was the Practice Manager for Governance Global Practice in the World Bank where she oversaw leading operations and non-lending technical assistance on public sector management, revenue mobilization, SOEs, fiscal policy, judiciary reforms, and e-government and open government reforms.

Chiara has over 25 years of experience in managing multi-stakeholders and multi-disciplinary projects gained in various international organizations namely the UN, IMF, OECD and the World Bank. She started her professional career as Economic Adviser at HM Inland Revenue (UK). She joined the OECD in 1998 as Young Professional, then the IMF in 2003 to pursue her career as Economist. She was also the Head of the Fiscal Affairs Office at the UN Mission in Kosovo before joining the World Bank in 2008 as Country Manager for Tajikistan Country Office, then became Lead Public Sector and Governance Specialist in 2012 and later Practice Manager.

Brittany Giroux Lane is the program manager of the Subnational Pilot Program of the Open Government Partnership (OGP). Her primary focus is to support the OGP pilot of 15 subnational governments and other local level reformers and civil society organizations in developing and implementing OGP action plans. Before joining OGP, Ms. Lane worked at the World Resources Institute and the Urban Institute on issues of local governance, urban planning, and urban service delivery. She holds an MSc in urban development planning from the Development Planning Unit at University College London, and a BA in urban studies and politics, philosophy, and economics from the University of Pennsylvania.

Undral Gombodorj is the director of the Democracy Education Center (DEMO), a Mongolian NGO. Ms. Gombodorj holds a master's degree in economics from the Institute of Economics, Czech Republic. She is a certified trainer, facilitator, mentor, researcher, and author of numerous publications in NGO management, social accountability, and governance. In 2012, Ms. Gombodorj initiated and launched the Check My Service initiative, which aims to assess the transparency and accountability of public services through a community scorecard. Ms. Gombodorj also currently serves as the convener and coordinator of the Partnership for Social Accountability, chair of the Network of Mongolian Volunteer Organizations, and works on the task force for drafting the nonprofit law in Mongolia.

Joko Purwanto is a member of the Board of Directors of Bojonegoro Institute, a former representative of the Extractive Industries Transparency Initiative (EITI), and a member of Oil and Gas Transparency Team of Bojonegoro, Indonesia. He has more than 10 years of experience in budget analysis and advocacy, freedom of information, and involvement in the EITI. In 2016, Bojonegoro was chosen as one of the 15 Open Government Partnership Subnational pioneers. The Bojonegoro action plan focuses on open government data revolution, enhancement of village government accountability, improvement of local budget transparency, enhancement of open procurement contract data, and improvement of the quality of public services.

Emilia M. Roslinda is the executive eirector of PROCESS-Bohol, Inc. a nonprofit organization operating in the Central and Eastern Visayas region of the Philippines since 1995. She is also the president of the Bohol Association of NGOs (BANGON). Her organization was chosen most outstanding civil society organization in 2012 by the Provincial Government of Bohol. Having been in development work for 28 years, Ms. Roslinda has an extensive experience in community organizing, community-based sustainable tourism, and gender and development, among others. She has bachelor of science in civil engineering and a master's degree in development studies from the Asian Institute of Management, Philippines.

Anano Tsintsabadze is a Georgian lawyer who has been working on numerous human rights issues, including social rights, environmental rights, and the right to sustainable urban development. At the moment, Ms. Tsintsabadze is working with the Open Society Georgia Foundation (OSGF), where she coordinates the Open Government Partnership (OGP) project at national and subnational levels, leading issues and advocacy concerned with OGP from the side of OSGF. She has a master of laws degree from Chicago Kent College of Law.

Annie Geron has been in public service for most of her life, having served in various positions in the National Manpower and Youth Council, the Technical Education and Skills Development Authority, and currently as director of the Research and Extension Services Department of Quezon City Polytechnic University in the Philippines. She has received international recognition for her various efforts to fight corruption and promote good governance, most notable of which was the Cultural Award for Anti-Corruption Work from the Confederation of Civil Servants and Salaried Employees of Denmark in November 2009. A staunch advocate of workers’ rights and quality public services, Ms. Geron has been the general secretary of the Public Services Labor Independent Confederation since 1990 and vice-president of Public Services International since 2002. She has effectively represented public sector labor interests in various technical working groups organized by the executive and legislative baranches of the Philippine Government, among others. She was a member of the Public Sector Compensation and Review Panel which negotiated the first ever national collective negotiation agreement with the administration of Philippine President Corazon Aquino. Ms. Geron is also the public sector union representative in the steering committee of the Open Government Partnership - Philippines. She has also served as official delegate and resource speaker in different regional and international conferences such as the international anticorruption conference at a past ADB annual meeting, the Global Forum on Migration and Development, International Labour Organisation Conference Workshop on Core Labor Standards, and the UN Conference on Reinventing Governance and Building Confidence on Government-Implementing the UN Anti-Corruption Convention.