Rule of Law for Inclusive and Sustainable Development: ADB’s Law and Policy Reform Program at Work 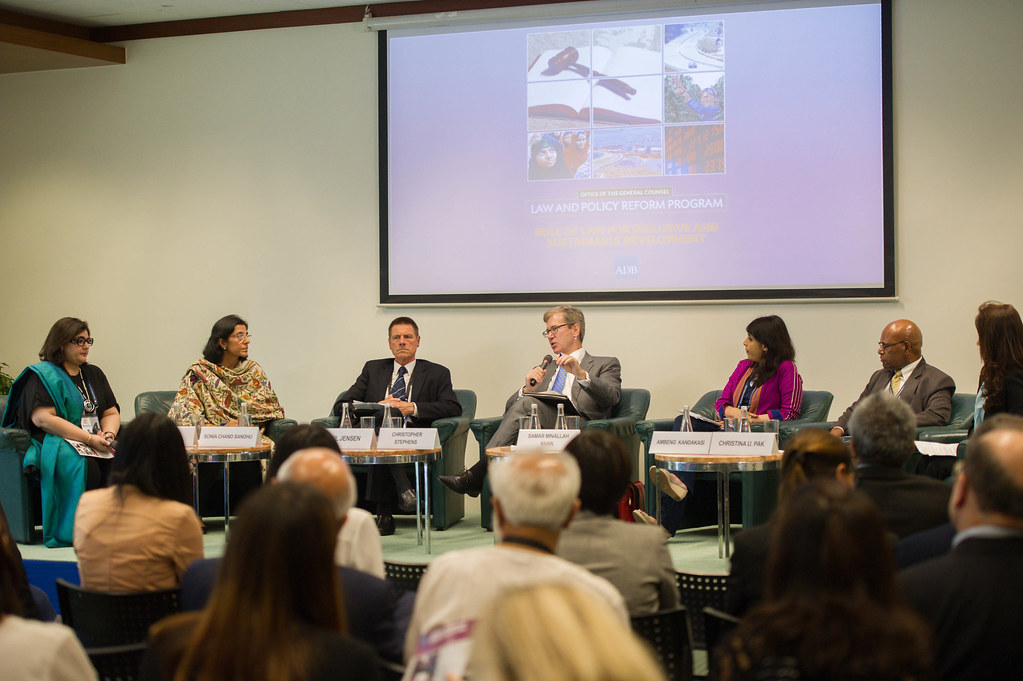 A strong legal infrastructure is crucial in accelerating poverty alleviation and inclusive and sustainable development. Since 1995, ADB, through the Office of the General Counsel’s Law and Policy Reform (LPR) Program, has been helping member countries craft, implement, and enforce clear and effective laws and regulations, and building the capacity of relevant institutions. Environmental law and sustainable development, infrastructure law, financial law, private sector development, and inclusive growth and access to justice comprise the LPR Program’s operational areas.

The panelists highlighted some of the LPR Program’s technical assistance projects. On anti-money laundering/combating the financing of terrorism (AML/CFT), Neil Jensen emphasized the importance of people’s confidence in the integrity and stability of the financial system. He noted the Financial Action Task Force’s (FATF) requirements to counter money laundering and terrorism finance and the sanctions for non-compliance; the challenges, particularly resource constraints, that countries and institutions face; and ADB’s national risk assessments and capacity-building programs to support efforts on AML/CFT.

On environmental law and sustainable development, Sonia Chand Sandhu talked about the crucial role played by judges in advancing sustainable, resilient and inclusive development; enforcing environmental laws and regulations; and ensuring the effective mitigation of environmental impacts and the implementation of optimal infrastructure design and resource allocation. Irum Ahsan enumerated some of the results of ADB’s work with judiciaries on the environment: green benches, green courts, specialized judges, and landmark environmental jurisprudence. Christina Pak discussed ADB’s Train-the-Trainers program, which has been educating an increasing number of environmental law champions in Asia and the Pacific. On international commercial dispute resolution, Ms. Pak highlighted ADB’s work with South Pacific legislatures and judiciaries to advance international commercial arbitration reform as a means of promoting foreign direct investment and cross-border trade in the region.

Justice Ambeng Kandakasi affirmed the need for arbitration reform to attract foreign investors, who see arbitration as an impartial, informed, expedient, and effective means of enforcing commercial contracts, resolving disputes, and maintaining people’s confidence in the industry. He recognized Fiji’s International Arbitration Act (2017), which the Fiji government enacted with ADB’s assistance, as an eye-opener to the South Pacific region about the urgency of international arbitration reform and the availability of ADB support in this area. On gender, Irum Ahsan narrated ADB’s initiatives to change the stereotypical and patriarchal mindset, promote gender equality, and combat violence against women in Afghanistan, Pakistan, and Tajikistan. ADB has been working with legal service providers to gender sensitize them, craft gender equality laws, and create gender-based violence courts, and targeting rural communities and media to advance pro-gender equality messages. Samar Minallah Khan related how traditional media can apply culturally-sensitive approaches, such as truck art and puppet shows, to effect positive changes in laws and jurisprudence.

Participants and panelists deliberated on the seemingly unequal implementation of FATF requirements and sanctions and the differentiated capacity of countries and institutions to comply and the consequences thereof to individuals and entire economies alike; the urgency of, and the challenges to, conducting national risk assessments on AML; the effectiveness of customized culture-based approaches, positive deviance, and education to shift patriarchal perspectives; sovereignty-related limitations on what institutions, such as ADB, can do to counter AML; and lastly, the benefits of using statistical information to target AML/CFT efforts. The event culminated with a short video about the gender mainstreaming initiatives through media done by the LPR Program in Pakistan.

Mr. Kandakasi was appointed justice in 2000. An accredited mediator, he chairs the Papua New Guinea Judiciary’s Alternative Dispute Resolution Committee where he was responsible for the successful development and implementation of mediation, and ADR now turning to arbitration. Mr. Kandakasi is an established facilitator, trainer, speaker, and publisher in mediation and ADR, and several law and practice fields.

Referred to by the media as "the savior of soul," among the "women who rock the world," and "the crusader with the camera," Ms. Khan continues to challenge child marriages and various forms of culturally sanctioned forms of violence against women and girls through trainings and screenings of documentaries. She has an MPhil degree in anthropology and development from the University of Cambridge and a master’s degree in social and cultural anthropology. Her work focuses on a culturally sensitive approach to development.

Neil Jensen was the chief executive officer of AUSTRAC, Australia’s Anti-Money Laundering Regulator and Financial Intelligence Unit from 2002 to 2009. Mr. Jensen was also the chair of the Global Egmont Group, which is an association of financial intelligence units worldwide, from 2008 to 2009. Over the past nine years, Mr. Jensen has consulted for a range of international organizations and countries delivering AML/CFT training, mentoring, and consultancy services. With ADB, Mr. Jensen has provided support and direction in the preparation of ML/FT national risk assessments to a range of ADB’s developing member countries.

Sonia brings 24 years of sustainable infrastructure experience from ADB, the World Bank, and private sector across green growth, liveable cities, environment policy, and coastal protection. She holds a master’s in environment engineering from the USA, a bachelor’s in architecture from India, a certificate in leading economic growth from the John F. Kennedy School of Government, Harvard, and an executive diploma in urban management tools for climate change from Erasmus University, Netherlands. She is a visiting research fellow at the University of Philippines and adjunct ADBI fellow, Tokyo.

Ms. Ahsan currently leads the Law and Policy Reform (LPR) Program in ADB. Her LPR work focuses on environmental and climate change law, gender equality, energy regulations, arbitration and corporate governance. Her work led to the establishment of several green courts in different countries, the Asian Judges Network on Environment, the first such network in the world, and Asia’s first court for gender-based violence cases in Pakistan. She is a committee member of ADB’s governance and gender thematic groups. Ms. Ahsan is an active advocate for gender consciousness and for women’s rights and passionately steers the gender discussions in ADB.

Christopher Stephens is the general counsel of ADB. He oversees a legal team of 85 people from 16 countries, which last year advised and negotiated more than 200 projects comprising more than 6,000 contracts and almost $30 billion of lending, investment, guarantee, and technical assistance projects across 42 developing countries. The team also advises the Board of Directors, the President, and ADB Management on bank policies, a $28 billion borrowing program and a range of institutional matters.

Christina Pak specializes in international finance and has been working on multisector projects across the Southeast and East Asia regions. She is a member of ADB’s climate change thematic group, and develops and implements environmental law, climate finance, and international arbitration law reform technical assistance projects under ADB’s OGC LPR Program. She obtained her juris doctor from Rutgers-Newark School of Law and is admitted in the states of New York and New Jersey. She is a member of the Chartered Institute of Arbitrators, International Union for Conservation of Nature World Commission on Environmental Law, and the International Bar Association.