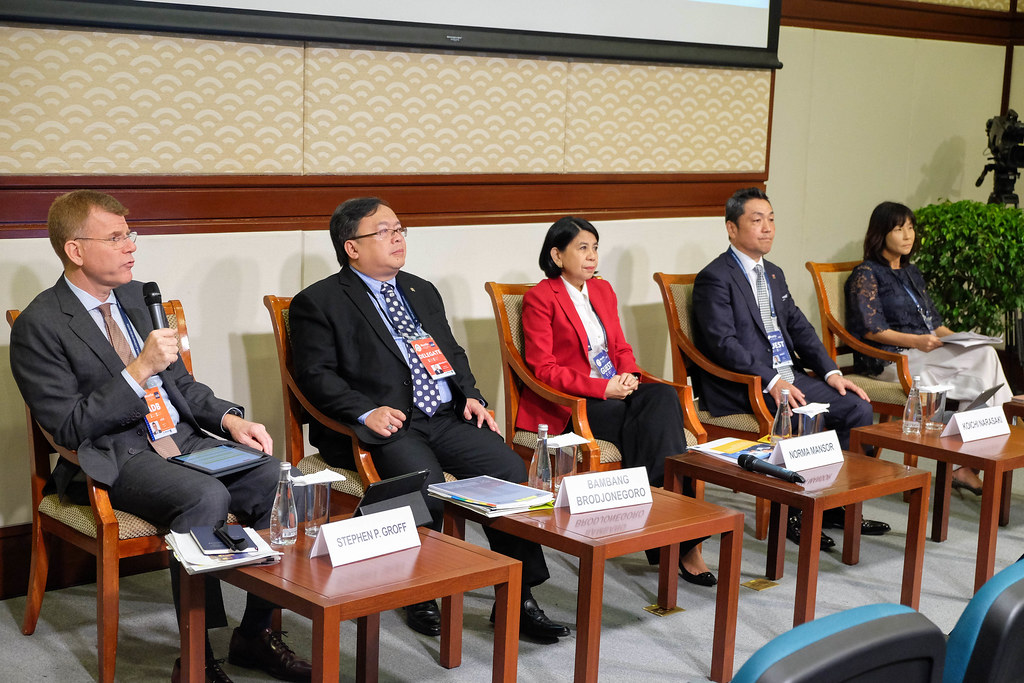 Asia is aging at unprecedented speed. While many parts of developing Asia still enjoy demographic dividend, many economies face the risk of growing old before it becomes rich. The panel of experts discussed the role of technology in sustaining productivity and economic growth in the region amid rapid aging.

The panelists shared that technology holds great potential in helping to improve health and longevity, transforming jobs and the workplace that is more flexible and friendly to senior workers, and providing support to aging populations through better education and training.

The panel agreed, however, that the potential gains from technology can only be harvested by conscious efforts and policy actions. Indonesia’s National Development Planning Minister and BAPPENAS Chair Bambang P.S. Brodjonegoro, also ADB alternate governor, said, “While Indonesia is expected to reap the demographic dividend which will reach its peak in 2034, we need to prepare for the inevitable change and learn lessons from aging economies.”

“Investing in the skills of senior workers and boosting their productivity is a win-win for both workers and the firms,” said Mr. Koichi Narasaki. Strengthening education and lifelong training helps equip the aging workers with ability and capacity to adapt to rapid technological change. “OECD experiences tell us that firms wouldn’t hire elderly workers unless they are properly trained and adaptable to new technologies,” added Ms. Yumiko Murakami.

Panelists also stressed the importance of instituting flexible labor policies and adequate social security and welfare to ensure such technology potential is realized and the gains are broadly shared. “Longevity dividend remains only a potential unless core institutions redesign themselves to be able to handle new changes brought by technology,” said Ms. Norma Mansor.

The panelists also noted the role of regional cooperation in enhancing cross-border labor mobility to benefit from the diversity in population profile across the region. The governments in the region may benefit by working together to improve the portability of skills and social security benefits.

Bambang Brodjonegoro is minister for development planning and head of Indonesia’s National Development Planning Agency, Bappenas. Prior to his appointment in 2016, he served as minister of finance, and before that, as vice minister of finance, a position he held since 2013. He joined the Ministry of Finance in 2011 as the acting head of the Fiscal Policy Agency. From 2009 to 2011, Mr. Brodjonegoro was director general of the Islamic Research and Training Institute of the Islamic Development Bank.

Norma Mansor is the director of the Social Security Research Centre and a Professor at the Department of Administrative Studies and Politics, Faculty of Economics and Administration, University of Malaya, where she served as the dean from 2004 to 2009. She was appointed secretary of the National Economic Advisory Council in Malaysia's Prime Minister’s Department from 2009 to 2011 and has served as advisor and consultant to various government bodies and private organizations including the UNDP, World Bank, ILO, OECD and the EU.

Yumiko Murakami has been at the forefront of policy discussions between OECD and governments, businesses and academia in Japan and Asia, covering a wide range of economic policy areas since she joined the OECD in 2013 as Head of OECD Tokyo Centre. Prior to joining the OECD, Ms. Murakami held a number of leadership positions, such as a managing director at Goldman Sachs and Credit Suisse. She has an MBA from Harvard University, an MA from Stanford University, and a BA from Sophia University.

Mr. Narasaki started his career at Mitsubishi Corporation and has over 36 years of global business development and management experience in both large enterprises and Silicon Valley startups. When he was CEO at ACCESS Co., Ltd. for five years, he made two acquisitions (Palmsource, Inc. and IP Infusion, Inc.) that increased the company revenues up to five times, turning it into a profitable venture. He is currently the first chief digital officer for Sompo Holdings, a global insurance conglomerate group composed of 75,000 people.

Stephen P. Groff is vice-president (Operations 2) of ADB, responsible for the full range of ADB's operations in East Asia, Southeast Asia, and the Pacific. His mandate includes establishing strategic and operational priorities in his areas of responsibility, producing investment and technical assistance operations amounting to approximately $5 billion annually, managing an existing portfolio of about $31 billion, and leading about 650 staff. Prior to joining ADB, he was affiliated with the Organisation for Economic Co-operation and Development (OECD) and the Millennium Challenge Corporation (MCC).