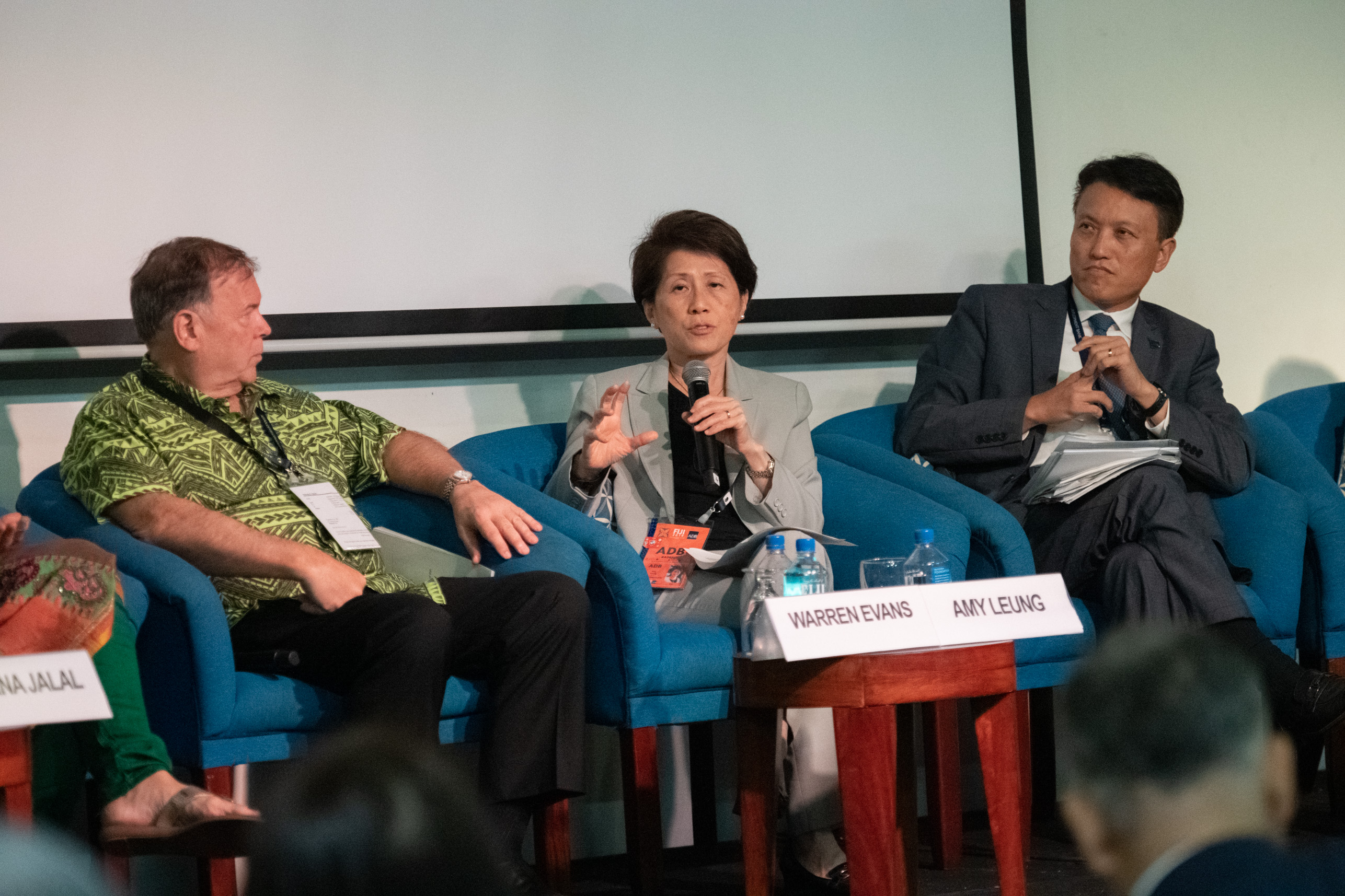 Amy Leung leads ADB’s lending and knowledge operations in the People's Republic of China and Mongolia. Prior to her current appointment, Ms. Leung was Director General of the Sustainable Development and Climate Change Department, where she provided leadership on the integration of innovative approaches and high-level technologies in selected projects in operations departments and forging partnerships with centers of excellence and other development agencies. Ms. Leung has expertise in urban development, water resources management, and project design and monitoring.

Imrana Jalal is the chair of the Inspection Panel at the World Bank Group. The Inspection Panel is the World Bank’s accountability mechanism. Ms. Jalal joined the Inspection Panel in 2018. Prior to this, she was a principal social development specialist for ADB, where she gained an intimate knowledge of multilateral development bank operations in various sectors. Ms. Jalal was a commissioner on the initial Fiji Human Rights Commission, the first of its kind in the Pacific Island countries. She is a jurist commissioner on the Geneva-based International Commission of Jurists, and served on the Commission’s Executive Board from 2011 to 2017. She has a master of arts in gender and development from the University of Sydney, and an LLB and LLM (hons) in international law from the University of Auckland. Ms. Jalal is a Fiji national.

Philip Rose served as alternate director for two years and director’s advisor for a year in ADB. Prior to ADB, he was a senior UK secondee at an EU foreign affairs agency. His notable international roles include head of education policy in the UK's Department for International Development (DFID) and program manager for both India and Thailand in DFID.

Woochong Um leads ADB-wide knowledge management and innovation in various thematic and sector operation areas. He is responsible for developing sector and thematic policies, strategies, frameworks, and operational plans; encouraging vibrant sector and thematic communities of practice; and developing new business ideas. He also looks after ADB’s compliance with environment and social safeguards. Mr. Um has master’s degree in business administration from the New York University Stern School of Business, and a bachelor of science degree in computer science from Boston College.

Warren Evans is the special project facilitator at ADB. His function focuses on participatory problem-solving for grievances caused by ADB-assisted projects and serves as a fair, trusted, and independent resource. He has over 40 years of professional practice, specializing in environment, climate investment policy, and sustainable development. Mr. Evans is not new to ADB—he served as one of the institution's first environment/development specialists and later as the director of environment and social safeguards from 1988-2003. Prior to this, he was director of environment and senior adviser for sustainable development at the World Bank from 2003-2013.

The ADB Accountability Mechanism Policy requires a joint learning report (JLR) describing lessons learned relating to complaints about ADB projects and resolution measures. The focus of the seminar was on a discussion draft of the 3-Year Joint Learning Report (JLR) covering 2016–2018.

Warren Evans as moderator introduced the panelists and the scope of the panel, and explained that the JLR will be revised after the annual meeting to incorporate key messages from the seminar. Dingding Tang summarized the lessons learned over the last 3 years, highlighting the increased number of complaints ADB Accountability Mechanism received compared to 2012–2016. He said that a key lesson is the need to strengthen project-level grievance redress mechanisms to better manage complaints and minimize complaints elevated to ADB and the Accountability Mechanism.

Amy Leung summarized experiences and lessons from the operations perspective—reflecting particularly on an ongoing case in Mongolia. She concluded a collaborative approach between ADB's Office of the Special Project Facilitator and operational departments is critically important for securing the support needed from executing agencies to effectively resolve disputes.

Woochong Um noted the linkages of ADB's Safeguard Policy Statement to the Accountability Mechanism, and measures to improve project-level complaint management, particularly through strengthened grievance redress mechanisms. He also pointed out that the current accountability mechanism structure seems to be working well.

Imrana Jalal compared experiences from World Bank inspection cases and highlighted the emergence of gender-based violence as the source of complaints and inspections at the World Bank.

Philip Rose reflected on the messages from the JLR and the panel members from the perspective of the higher level oversight of the ADB Board. He discussed risks and issues going forward, especially in light of the increased lending levels for large-scale infrastructure under ADB's Strategy 2030.

Some of the participants, particularly NGOs, emphasized the need to keep the accountability mechanism strong and independent. They expressed some concern as to the upcoming review of the Safeguard Policy Statement and how that might impact on the Accountability Mechanism Policy.