Impact of ADB's Energy Policy and the Paris Agreement 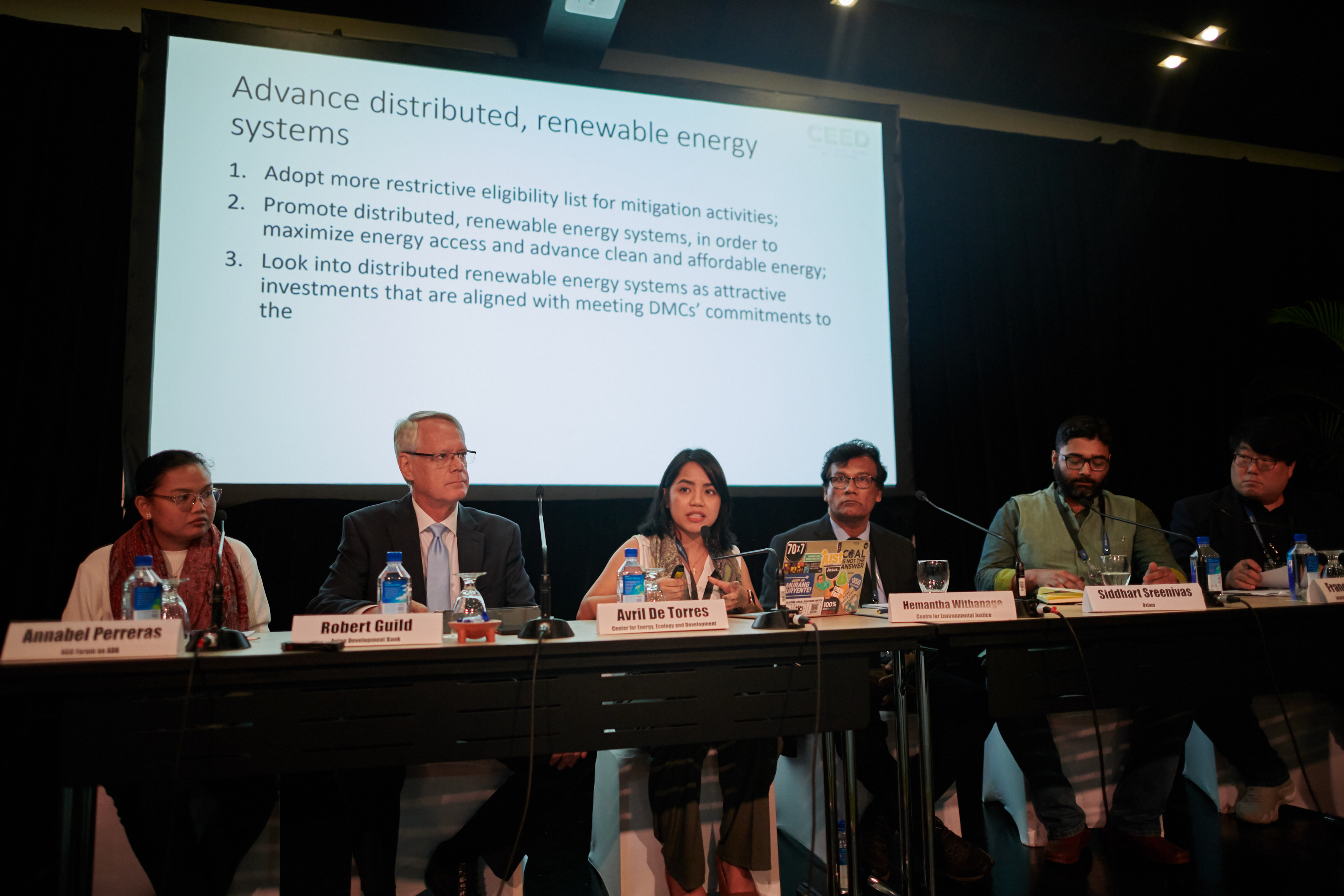 Avril De Torres is an environmental and energy lawyer from the Philippines. She is the research and policy head of the NGO Center for Energy, Ecology and Development (CEED). Ms. De Torres was a panelist at a COP 24 side event entitled "From Local Approaches to (Inter)national Policy: Gender Just Transition and Decent Work." Discussing how the energy landscape in the global south looks like today, Ms. De Torres investigated the mistaken notion that coal expansion is a form of development, with many of people vulnerable to the devastating impacts of climate change. Promoting energy democracy and a just transition to a fossil-free future are the true faces of development, providing opportunities for transformation among marginalized sectors of society.

Robert Guild is responsible for ADB-wide technical collaboration, innovation, and resource mobilization for seven sector groups in transport, energy, urban, water, education, health, and finance. He is an expert on infrastructure investment for social and economic development. He has advised governments, the private sector, and multilateral institutions in over two dozen countries in Asia, the Pacific, and Latin America on public investments, public-private partnerships, and national and regional development plans. His published work covers transport and urban economics, interregional development, and public investment policy. Mr. Guild began his career as an engineer in the US and has worked extensively for bilateral and multilateral agencies in international development. He has held faculty appointments at universities in the US, the Pacific region, and New Zealand. He has been with ADB since 2003. Mr. Guild holds degrees in civil engineering, public administration, urban and regional planning, and international development.

Francis Kim Upgi is a director of economic and social policy for the International Trade Union Confederation - Asia Pacific (ITUC-AP), which is an regional arm of the ITUC with autonomy. The ITUC-AP represents 59 trade union national centres in 34 countries and territories in Asia and the Pacific, effectively covering over 60 million workers in Asia and the Pacific. His area of responsibility is a economic and social policy, including wages, social protection and development, for trade unions in the region. He is closely working with the ILO and TUAC(trade union advisory committee) to the OECD, and also in liaison with international/regional financial insitutions, in particular with the ADB. Before joining the ITUC-AP in 2013, Francis used to work for the Federation of Korean Trade Unions (FKTU), a national centre of Korean trade unions. He studyed economics and finance at the University of York and has a master in Ecoomics from the LSE.

Hemantha Withanage is a co-founder and the executive director of Centre for Environmental Justice. He also serves as an executive member of the Friends of the Earth International (FOEI). He is also the convener of the Sri Lankan Working Group on Trade and International Financial Institutions. Previously, he was executive director of NGO Forum on ADB. Mr. Withanage also served in various positions at the Environmental Foundation Ltd., starting in 1990. He was instrumental in building the Environmental Foundation Ltd. up to become a leading NGO in Sri Lanka. He was an active member of the following international committees and networks during the past years: Executive Committee of the FOEI, Steering Committee of Oilwatch, the FOEI Working Group on Water, FOEI ADB Task Group. He has been a member of the Environmental Law Alliance–Worldwide since 1991.

Annabel S. Perreras advocates on issues of international financial institutions’ accountability, human rights, and community engagement. Before joining the NGO Forum on ADB, she was a recipient of the Emerging Global Leaders Initiative Atlas Corps fellowship, which based her at the International Accountability Project in Washington, D.C. for a year. As the policy coordinator at IAP, she contributed to the flagship early warning system program aimed at providing community support and project information to potentially affected communities before board approval. Previously, Ms. Perreras was the policy officer of the Forum for two years. She worked with local partner CSOs in filing complaints in ADB’s Accountability Mechanism, and was involved in the safeguards evaluation process of ADB. She was a junior program officer at the League of Cities of the Philippines for 3 years, handling projects to improve the state of maternal health in the country and to make cities resilient and competitive, among others. She has a bachelor's degree in political science and a diploma in urban and regional planning.

ADB's energy policy is based on three pillars: promoting energy efficiency and renewable energy; maximizing access to energy for all; and promoting energy sector reform, capacity building, and governance. Together with other multilateral development banks, ADB has pledged to help developing member countries meet the Paris Agreement by further mobilizing public and private finance to help countries reduce greenhouse gas emissions and adapt to climate change.

The panel discussed concerns related to ADB-supported energy projects in some developing member countries. The speakers also highlighted the urgency of transitioning into renewable energy and promoting energy efficiency consistent with the principles of the Paris Agreement. The discussions also noted ADB’s increased financing for renewable energy and energy efficiency and its support to its member countries to fulfill their nationally determined contributions to reduce emissions and adapt to the impacts of climate change. ADB will be undertaking a review of its Energy Policy 2009 in consideration of technological advances and its recently approved Strategy 2030.