Suzanne Marie Ramos, 31, leaves her house before dawn and before her 12-year-old daughter wakes up to start her 31-kilometer trip to work by packed public commuter van and light rail train.

Her commute from Meycauyan City in Bulacan province north of Manila to Taguig City takes an average of 2 hours one way, leaving her tired, lacking in sleep, and with less time to spend with her young family.

“I get only about 5 hours of sleep daily. I eat breakfast in the office just so I can beat traffic and get to work early,” Ramos said.

She is one of the millions of commuters who suffer daily from traffic in Manila, a city with the third worst traffic conditions in Southeast Asia according to a study by Boston Consulting Group. This resulted from the lack of proper infrastructure and access to work, schools, and social services following years of underinvestment especially in high-capacity transportation.

Economic loss due to road congestion was estimated to be at least $53.6 million per day, or around $18 billion a year, in 2014, according to the Philippine Development Plan.

To address this problem, the Philippine government launched the “Build, Build, Build” (BBB) infrastructure development program in April 2017 aimed at raising public spending on infrastructure to 7% of gross domestic product by 2022 from less than 2% a decade ago, with total required investment estimated at $158 billion.

Connecting regions to markets in the Philippines

The BBB program is aligned with the government’s National Spatial Strategy which seeks to address wide income disparities across the country by connecting regions to markets and attracting more investment, generating jobs, and spurring improved regional economic growth in a country that is already one of Southeast Asia’s fastest growing economies. The strategy aims to decongest Manila and cut poverty by ensuring the benefits of growth reach the marginalized.

One of the big-ticket projects under the BBB program is the North-South Commuter Railway (NSCR), a 163-kilometer suburban railway network connecting the growing urban areas in Pampanga and Tarlac provinces in the north and Calamba in Laguna province in the south to Metro Manila. The railway, including links to the soon-to-be-completed New Clark City in Tarlac, will be constructed in sections.

On 23 May, the Asian Development Bank (ADB) approved a $2.75 billion financing facility for the Malolos-Clark Railway Project covering two sections of the NSCR. Under the facility, $1.3 billion will be committed this year to fund the project, with two additional tranches to be released by 2022. The Japan International Cooperation Agency (JICA) is co-financing the project.

It will be ADB’s biggest project in the Philippines and ADB’s single largest infrastructure project financing in its 52-year history.

“The benefits from the Malolos-Clark Railway project will be significant, from a more reliable commute for ordinary Filipinos to potentially bigger investments in regional centers like Clark because of the improved access to the capital Manila,” said Mr. Ramesh Subramaniam, Director General of ADB’s Southeast Asia Department.

“We will be using cutting-edge technology in building an elevated railway line, and we will ensure the project follows ADB, JICA, and government policies on environmental impact and social standards,” he said.

The project includes the creation of a training center for railway staff and an operation control center to ensure efficient rail operations. ADB is supporting institutional capacity building of the Philippines’ Department of Transportation (DOTr) to manage the project, and will help establish a regulator for railway safety.

“The Malolos-Clark Railway project, along with the expansion of the Clark International Airport, are part of the government’s overall regional development plan for North and Central Luzon aimed at enhancing mobility and connectivity in the country to make the everyday lives of all Filipinos more comfortable,” said DOTr Secretary Arthur Tugade.

The project will provide safe, reliable, and affordable public transport for a total of about 342,000 passengers expected to travel daily along the Manila–Clark corridor and up to 696,000 passengers per day to Calamba by 2025. It is estimated to cut the travel time from Metro Manila to Clark International Airport to less than one hour by rail, compared with 2 to 3 hours by car or bus today. The project is expected to be partially operational from 2022.

“It is a good option for me since I also go to Clark rather than the point-to-point buses that are now available, because we all know travelling by train is a lot faster,” said Ramos, who also travels to Pampanga as part of her work as a sales and marketing officer.

Malolos-Clark Railway will have seven stations, with one station linked to Clark International Airport  which is currently building a second terminal to triple its capacity to 12 million passengers by 2020 from the current 4.2 million.

The railway will make the airport in Clark a viable option for tourists and business travelers, helping to decongest the Ninoy Aquino International Airport in Manila, which has exceeded by 20 percent its maximum capacity of 35 million passengers in 2017. 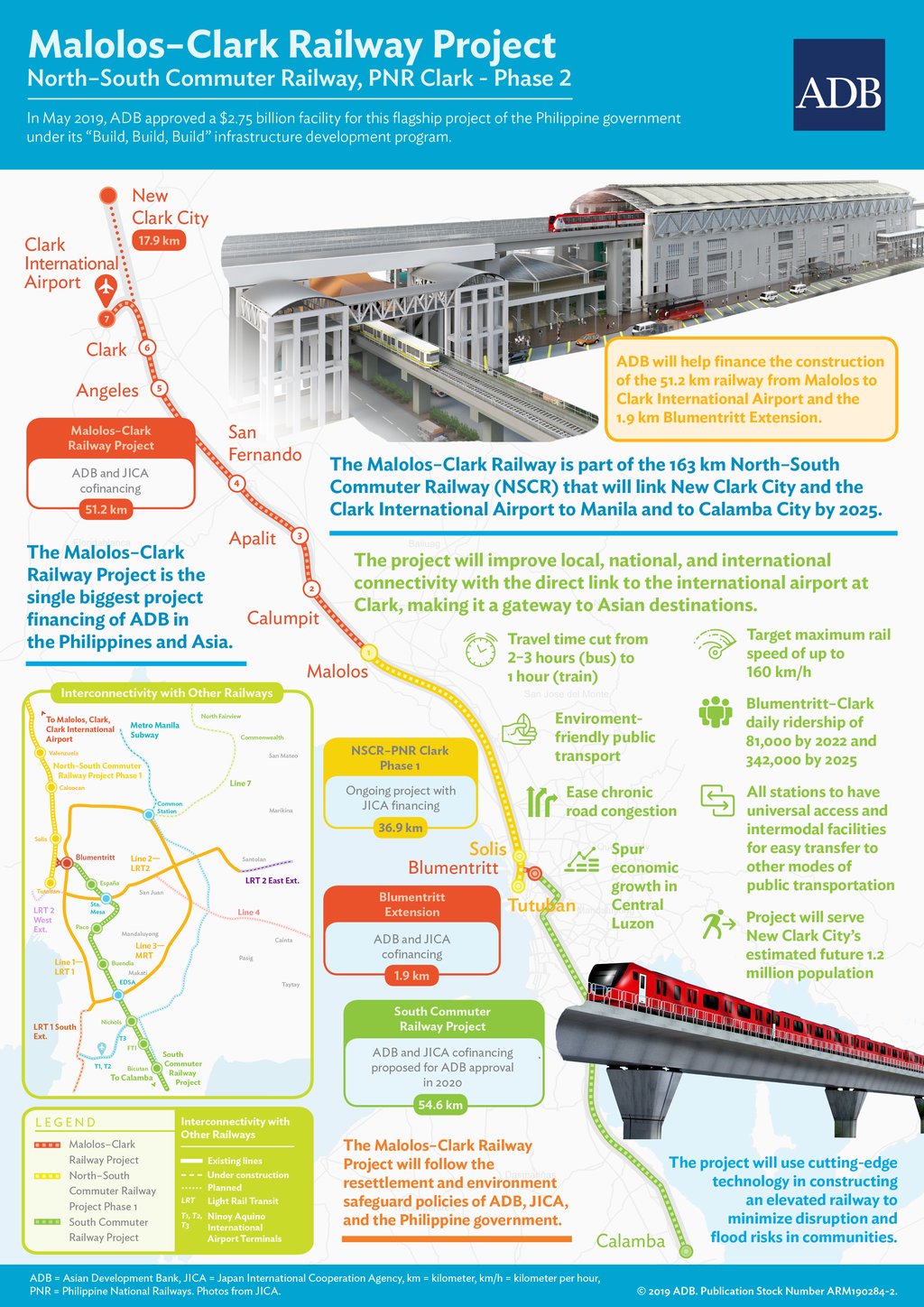