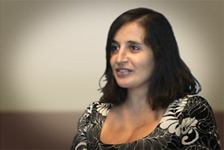 What makes ADB a great workplace?

I have been in ADB for 10 years and time has gone by quickly because of the job I’ve been doing. I have been working for 9 years on designing and implementing projects in the field for rural development and for the empowerment of women in several countries. Because of the passion and motivation that inspire me to work with ADB, I derive a lot of satisfaction from my job. I really believe in the overall objective of ADB of poverty reduction and improvement of lives of people in Asia.

I have been working on a special project which I consider a very important project for ADB. It is for a country in South Asia aimed at helping low-caste women to empower themselves in terms of social issues, economic issues, and legal issues. I designed the project and unfortunately, only partially implemented, but that was a great achievement for myself in my career and it made coming to work every day very self-fulfilling and made my effort less of a burden than it would be if you do not believe in what you do.

Because of the passion and motivation that inspire me to work with ADB, I derive a lot of satisfaction from my job. I really believe in the overall objective of ADB of poverty reduction and improvement of lives of people in Asia.

What made you decide to work for the Asian Development Bank?

I wanted to work in development to change the world, to improve the world. Because I’ve seen there are some countries, some people that are luckier than others. I believe that everybody should have a decent life and a good life. I studied poverty reduction and development in university because I really believe that we need to change something in this world.

How does ADB encourage and support the development of its professionals?

I came here as a Young Professional and was quite young. I had some work experience, but basically I grew with the institution mainly by learning-by-doing. There is a lot of mentoring in the field during missions – and that’s where you learn the tools of the trade. I also attended several courses for specific subjects that I was interested in based on my work plan. For instance I went to Holland for a couple of weeks to do a specialization course on agri-business because that was main focus starting from 2006. There is a mix of learning-by-doing and courses which are not really formal. You select the topics you wish to deepen your knowledge on by attending courses either internally or externally. ADB allows you to take a few weeks off per year to attend external training courses.

What is the role ADB plays in the career development of its professionals?

When I joined, I was assigned a formal mentor who helped me understand the institution and help me with more logistical issues with respect to adjusting to living in Manila, which is a big city. Initially there was some adjustment to the living environment.

However, the mentors I consider most valuable are the ones I encountered when I started going on missions – senior mission leaders. They really helped me understand the project cycle, the way ADB does business, how to do business with government officials in the field – key things you need to know when preparing for and implementing projects.

How do ADB’s employee benefits help the Bank’s female professionals?

ADB just approved the extended maternity leave which allows employees to use an additional 3 months of leave without pay but inclusive of all other benefits. I took advantage of this and think it is a very important benefit for women because the 12-week official maternity leave may not be enough depending on the situation that you have at home.

In addition, when I came back to work, I was allowed to work half-day. This is not an official benefit but it can be arranged internally and I thought it was an excellent arrangement. Until my child turned 8 months old, I was either at home or working half day. So that was very useful for me.

How has your work specifically created an impact in the countries ADB serves?

We had a specific project which had a condition for the government. We were only going to grant the loan if the government was willing to change 118 laws which discriminated women and contradicted portions of their own constitution. When the government was ready to pass the changes, I already felt it was a huge achievement. It was more a change at the framework level but I thought it was the first step in improving the lives of those women.

When the project was approved and implemented, it changed the lives of women in many small ways. For instance, the project trained police officers to be more gender-sensitive so women would feel safe to report crimes or report to the police. We trained judges to learn how to treat women in sensitive cases.

The project also funded the establishment of pathways – we are talking about a country with a number of remote areas – women were forced to walk for hours to fetch water (which is a classic in remote rural areas). By establishing the footpath, we were able to cut the time to fetch water by a few hours, which gave women more time to spend with their families or initiate a small economic activity.

The project funded a series of small things but made a big difference in the lives of those women living in remote areas. I am very proud of the project although it took a long time to start. But in the end, the results were quite impressive.

Back to Meet our People