ADB’s central mission is working to reduce poverty in Asia and the Pacific and to ensure the benefits of economic growth and social development are equitably spread.

Poverty reduction has been central to the bank’s operations since its establishment in 1966. Asia’s extraordinary economic expansion has lifted millions out of poverty, but sustained effort over decades remains critical to ensure that the poor are able to benefit from and contribute to the growth process. ADB’s Strategy 2030 envisions an Asia and Pacific that is inclusive, where the region’s gains and opportunities are shared by all.

Poverty reduction in Asia and the Pacific, even in countries with relatively high per capita income, remains an unfinished agenda. Despite the region's impressive economic growth in recent decades, it remains home to a large share of the world's poor. In 2017, more than 200 million people were living on less than $1.90 a day. Around one billion people were living on less than $3.20 a day. Rapid economic growth has not translated into an even distribution of income and opportunities. Inequality in income, wealth, and opportunity has grown in most developing member countries (DMCs). 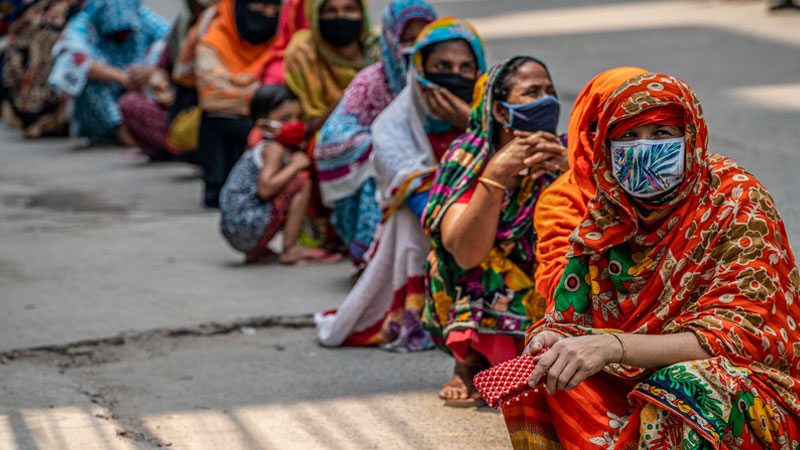 ADB estimates that the COVID-19 pandemic has pushed about 78 million people in Asia back into extreme poverty.

Poverty has multiple dimensions, and many people in the region face not only income poverty but also poor health, lack of education, food insecurity, and inadequate living conditions. The number of people without adequate food in the region remains significant. More than 60% of undernourished people globally (more than 500 million people) live in Asia.

ADB’s first operational priority in its corporate Strategy 2030 focuses on addressing remaining poverty and reducing inequalities. Central to ADB’s approach is a focus on investing in human capital development and social protection, generating quality jobs, and reducing inequality of opportunity. Asia’s recent success is not only its impressive economic growth, but also the huge reductions in extreme poverty across the region. ADB’s work, with its focus on inclusivity, has contributed significantly to regional poverty reduction for more than half a century.

Poverty and social analyses are a prerequisite for all ADB loans and grants. These analyses identify potential social issues and define actions during project design and implementation to ensure that projects maximize social benefits and minimize social risks. After project completion, project performance evaluations assess the impact of projects on targeted beneficiaries, affected people, and other stakeholders. ADB’s work, with its focus on inclusivity to ensure the benefits of growth are extended to all, has contributed to regional poverty reduction for more than half a century. ADB’s Social Protection Indicator estimates that close to 60% of people across the region are without adequate social protection. Benefits remain quite low in the region and many systems lack adaptability and shock responsiveness. Social protection policies and programs have a central role to play in addressing the social, economic and health dimensions of shocks like the COVID-19 pandemic.

Quality jobs and the future of work

Asia and the Pacific has experienced rapid economic progress over the past 25 years, creating 30 million jobs annually and contributing to significant improvements in living standards. The growth in jobs has been accompanied by improved productivity, higher earnings, and large reductions in poverty. Despite continued economic growth (4.6% in 2019) and a relatively low unemployment rate (4.4% in 2019), Asia’s job-related challenges persist. While economic growth has rapidly created new jobs, they have not always been quality jobs that provide a secure and stable source of income, particularly for women, the poorest and most vulnerable. The growth in jobs has been accompanied by improved productivity, higher earnings, and large reductions in poverty.

A coherent approach to facilitating quality jobs will amplify returns from infrastructure and other investments for ADB’s development member countries. Job creation from investments in infrastructure can be reinforced through appropriate diagnostic tools. The ADB-supported Visakhapatnam–Chennai Industrial Corridor Development Program is linking infrastructure with employment growth, potentially generating 11 million additional jobs over 30 years.

Vast numbers of poor families have benefited from the expansion of social protection systems in the region, especially from targeted social assistance. However, because cash transfers can address only a part of the reality of poverty, governments are increasingly using the graduation approach to strengthen resilience and tackle the multifaceted constraints faced by the poorest and most vulnerable households. The graduation approach is an innovative, holistic, and empirically proven way to address poverty and reduce inequality. It is also a key operational priority of ADB’s Strategy 2030.

Graduation programs build on targeted social assistance, such as cash transfers, with coaching and mentoring, livelihoods promotion through productive assets and technical training, social empowerment, and financial inclusion for participating households. Time-bound and carefully sequenced for maximum impact, these multi-dimensional graduation elements give poor and vulnerable participants a big push, build confidence, and sustainably lift them out of poverty. ADB is applying the graduation approach to social protection operations and to improving livelihood restoration in the context of involuntary resettlement. The graduation approach is an innovative, holistic and proven approach to addressing remaining poverty and reducing inequality.

Internal and external migration are important contributors to economic and social development across Asia and the Pacific. Migrants often bring new and updated skills, trade, and entrepreneurship. Their remittances are important to poverty reduction and boosting economic activity in their places of origin. However, the movement of people can lead to challenges such as urban overcrowding, pressure on limited services, loss of human resources, environmental damage, and health issues. ADB supports its DMCs to maximize the benefits of human mobility, while effectively managing its challenges. Migrants often bring skills, trade and entrepreneurship with them.

Disability is a major vulnerability globally and in the region. Approximately 70% of the global population of people with disabilities (690 million) live in the Asia and the Pacific region. Forty-three countries in the region have ratified the Convention on the Rights of Persons with Disabilities; only 12 governments have anti-discrimination legislation. Many persons with disabilities face extreme poverty because of lack of access, and exclusion from opportunities. The poverty rate among persons with disabilities is higher than the overall population. In countries where data is available, the difference can range from 3.9% to 20.6%. Disability is a major vulnerability globally and in the region.

In terms of employment, persons with disabilities are two to six times less likely to be employed than those without disability. In some countries, social protection measures such as government-funded healthcare and disability benefits only reach around 28% to 30% of people with disabilities. Among children with disabilities, at least one third are unlikely to receive early intervention. The issue of disability is expected to gain increased attention in the coming years, due in large part to rapid aging in the region. This will require action regarding affordable assistive technology, development of long-term care systems and services and inclusive infrastructure design. Addressing these challenges will require employing multiple approaches: empowerment and participation of people with disabilities, attention to needs across the life-course, improving data on disability (age and gender-sensitive), and cross-sectoral engagement. Asia and the Pacific is both the fastest aging and youngest region of the world. Longer life expectancies and decreased fertility rates are leading to rapid aging in Asia and the Pacific. By 2050, one in four people in Asia and the Pacific will be over 60 years old, reaching close to 1.3 billion people. While increased longevity is a positive outcome of economic and social development, this demographic transition will have important social and economic consequences for the region.

To support poverty reduction in its DMCs, ADB administers a number of special multi-donor poverty funds: